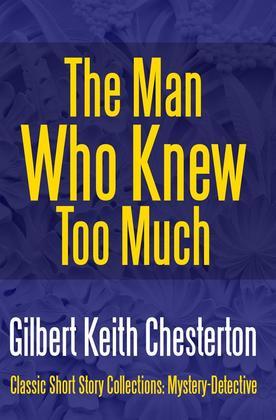 The Man Who Knew Too Much

The Man Who Knew Too Much and other stories (1922) is a book of detective stories by English writer G. K. Chesterton, published in 1922 by Cassell and Company in the United Kingdom, and Harper Brothers in the United States. The book contains eight connected short stories about "The Man Who Knew Too Much", and additional unconnected stories featuring separate heroes/detectives. The United States edition contained one of these additional stories: "The Trees of Pride", while the United Kingdom edition contained "Trees of Pride" and three more, shorter stories: "The Garden of Smoke", "The Five of Swords" and "The Tower of Treason".

This contains the first 8 of the 12 stories in the published book The Man Who Knew Too Much and Other Stories. In these 8 detective thrillers, the main protagonist is Horne Fisher. (The omitted four are individual stories with separate heroes/detectives.)

Due to close relationships with the leading political figures in the land, Fisher knows too much about the private politics behind the public politics of the day. This knowledge is a burden to him because he is able to uncover the injustices and corruptions of the murders in each story, but in most cases the real killer gets away with the killing because to bring him openly to justice would create a greater chaos: starting a war, reinciting Irish rebellions, or removing public faith in the government.

A film of the same title was made in 1934 and remade in 1956, both directed by Alfred Hitchcock, but the films had nothing at all in common (except the title) with these short stories. Hitchcock decided to use the title simply because he had the rights for some of the stories.

THE FACE IN THE TARGET (Excerpt)
HAROLD MARCH, the rising reviewer and social critic, was walking vigorously across a great tableland of moors and commons, the horizon of which was fringed with the far-off woods of the famous estate of Torwood Park. He was a good-looking young man in tweeds, with very pale curly hair and pale clear eyes. Walking in wind and sun in the very landscape of liberty, he was still young enough to remember his politics and not merely try to forget them. For his errand at Torwood Park was a political one; it was the place of appointment named by no less a person than the Chancellor of the Exchequer, Sir Howard Horne, then introducing his so-called Socialist budget, and prepared to expound it in an interview with so promising a penman. Harold March was the sort of man who knows everything about politics, and nothing about politicians. He also knew a great deal about art, letters, philosophy, and general culture; about almost everything, indeed, except the world he was living in.

Abruptly, in the middle of those sunny and windy flats, he came upon a sort of cleft almost narrow enough to be called a crack in the land. It was just large enough to be the water-course for a small stream which vanished at intervals under green tunnels of undergrowth, as if in a dwarfish forest. Indeed, he had an odd feeling as if he were a giant looking over the valley of the pygmies. When he dropped into the hollow, however, the impression was lost; the rocky banks, though hardly above the height of a cottage, hung over and had the profile of a precipice. As he began to wander down the course of the stream, in idle but romantic curiosity, and saw the water shining in short strips between the great gray boulders and bushes as soft as great green mosses, he fell into quite an opposite vein of fantasy. It was rather as if the earth had opened and swallowed him into a sort of underworld of dreams. And when he became conscious of a human figure dark against the silver stream, sitting on a large boulder and looking rather like a large bird, it was perhaps with some of the premonitions proper to a man who meets the strangest friendship of his life...

Gilbert Keith Chesterton, (29 May 1874 – 14 June 1936), better known as G. K. Chesterton, was an English writer, poet, philosopher, dramatist, journalist, orator, lay theologian, biographer, and literary and art critic. Chesterton is often referred to as the "prince of paradox". Time magazine has observed of his writing style: "Whenever possible Chesterton made his points with popular sayings, proverbs, allegories—first carefully turning them inside out."

Chesterton is well known for his fictional priest-detective Father Brown, and for his reasoned apologetics. Even some of those who disagree with him have recognised the wide appeal of such works as Orthodoxy and The Everlasting Man. Chesterton routinely referred to himself as an "orthodox" Christian, and came to identify this position more and more with Catholicism, eventually converting to Catholicism from High Church Anglicanism. George Bernard Shaw, his "friendly enemy", said of him, "He was a man of colossal genius." Biographers have identified him as a successor to such Victorian authors as Matthew Arnold, Thomas Carlyle, Cardinal John Henry Newman, and John Ruskin.