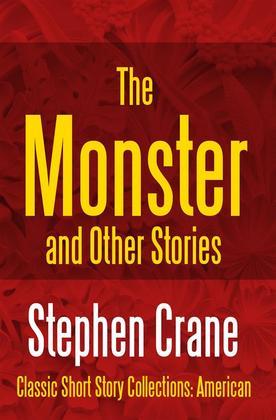 The Monster and Other Stories

The Monster is an 1898 novella by American author Stephen Crane (1871–1900). The story takes place in the small, fictional town of Whilomville, New York. An American-African coachman named Henry Johnson, who is employed by the town's physician, Dr. Trescott, becomes horribly disfigured after he saves Trescott's son from a fire. When Henry is branded a "monster" by the town's residents, Trescott vows to shelter and care for him, resulting in his family's exclusion from the community. The novella reflects upon the 19th-century social divide and ethnic tensions in America.

The fictional town of Whilomville, which is used in 14 other Crane stories, was based on Port Jervis, New York, where Crane lived with his family for a few years during his youth. It is thought that he took inspiration from several local men who were similarly disfigured, although modern critics have made numerous connections between the story and the 1892 lynching in Port Jervis of an African-American man named Robert Lewis. A study of prejudice, fear, and isolation in a rather small town, the novella was first published in Harper's Magazine in August 1898. A year later, it was included in The Monster and Other Stories—the last collection of Crane's work to be published during his lifetime.

Written in a more exact and less dramatic style than two of his previous major works (Maggie: A Girl of the Streets and The Red Badge of Courage), The Monster differs from the other Whilomville stories in its scope and length. Its themes include the paradoxical study of monstrosity and deformity, as well as race and tolerance. While the novella and collection received mixed reviews from contemporary critics, The Monster is now considered one of Crane's best works.

The Monster (excerpt)
Little Jim was, for the time, engine Number 36, and he was making the run between Syracuse and Rochester. He was fourteen minutes behind time, and the throttle was wide open. In consequence, when he swung around the curve at the flower-bed, a wheel of his cart destroyed a peony. Number 36 slowed down at once and looked guiltily at his father, who was mowing the lawn. The doctor had his back to this accident, and he continued to pace slowly to and fro, pushing the mower.

Jim dropped the tongue of the cart. He looked at his father and at the broken flower. Finally he went to the peony and tried to stand it on its pins, resuscitated, but the spine of it was hurt, and it would only hang limply from his hand. Jim could do no reparation. He looked again towards his father.

He went on to the lawn, very slowly, and kicking wretchedly at the turf. Presently his father came along with the whirring machine, while the sweet, new grass blades spun from the knives. In a low voice, Jim said, "Pa!"

The doctor was shaving this lawn as if it were a priest's chin. All during the season he had worked at it in the coolness and peace of the evenings after supper. Even in the shadow of the cherry-trees the grass was strong and healthy. Jim raised his voice a trifle. "Pa!"

The doctor paused, and with the howl of the machine no longer occupying the sense, one could hear the robins in the cherry-trees arranging their affairs. Jim's hands were behind his back, and sometimes his fingers clasped and unclasped. Again he said, "Pa!" The child's fresh and rosy lip was lowered...

Stephen Crane (November 1, 1871 – June 5, 1900) was an American poet, novelist, and short story writer. Prolific throughout his short life, he wrote notable works in the Realist tradition as well as early examples of American Naturalism and Impressionism. He is recognized by modern critics as one of the most innovative writers of his generation.

The ninth surviving child of Protestant Methodist parents, Crane began writing at the age of four and had published several articles by the age of 16. Having little interest in university studies, he left college in 1891 to work as a reporter and writer. Crane's first novel was the 1893 Bowery tale Maggie: A Girl of the Streets, generally considered by critics to be the first work of American literary Naturalism. He won international acclaim in 1895 for his Civil War novel The Red Badge of Courage, which he wrote without having any battle experience.