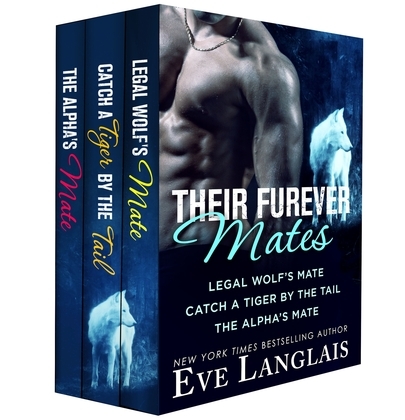 Legal Wolf?s Mate
Taking on a pro bono murder case isn't a problem for a lawyer who enjoys a challenge. Discovering his new client is his mate? A tad more complicated. Gavin has no intention of settling down, especially not with a woman accused of murder. But the beautiful, fiery Megan has his blood boiling and his heart racing, and it doesn't take Gavin long to know that his fate is sealed...

Catch a Tiger by the Tail
Broderick has a job to do?audit the books of a gentleman?s club. Sounds simple, except his company wants him to find dirt linking to the mob, his secret mob employer wants someone to pin the blame on, and the bar manager at the heart of the controversy doesn?t want him?even though she?s his mate.

The Alpha?s Mate
When Fabian saves a woman from drowning, everything he knows gets tossed away and only one thing becomes clear: she?s his mate?and someone wants to kill her. Hell no. Protecting her, though, is only part of his problem. He also has to convince her she belongs to him. In her words, ?Hell no.? When she flees, little does she realize this wolf loves to chase. And when he catches the woman he wants? She?ll become the Alpha?s Mate.