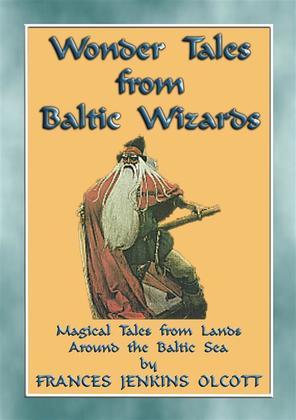 In this volume you will find tales of Enchantments, Wizards, Witches, Magic Spells, Nixy Queens, Giants, Fairy White Reindeer, and glittering Treasures from the Amber lands bordering the Baltic Sea -- Lapland, Finland, Estonia, Latvia, and Lithuania. There is a mass of East Baltic folklore from which to choose which gives but a feeble idea of the extent of Baltic folk-lore.

Herein you will find 41 stories like The Battle Of The Wizards, Kari Woodencoat, The Living Kantele, The Rainbow Maiden, The Maiden Of The Milky Way, The Luck Egg, The Amber Wizard and many, many more.

Their setting is the Long Winter Night with its brilliant play of Northern Lights over the snow-covered tundra; or the brief Arctic summer--its sun burning night and day--with its birds, flowers, insect-clouds, singing waters, and almost tropic heat; or the golden sunshine of the southern amber coast.

But it is the Northern Lights themselves, flashing and flaming through the dark heavens, that cast their mystic weirdness over many of these tales moulded by the peculiar imagination of the Asiatic and European East Baltic folks.

The farther our stories draw south from Lapland, the lower sink the Northern Lights and their influence on folk-tales, till at last they merge with the warmer lights of Lithuania - the Amber-Land. Wizards and wizardry abound in Lappish, Finnish, and Estonian tales, Witches appear more often in Latvian and Lithuanian ones. And in all these countries except Lapland, many European folk-tale themes, which we know are found in new forms in the Grimm collection.

10% of the publisher’s profit from the sale of this book will be donated to UNICEF.