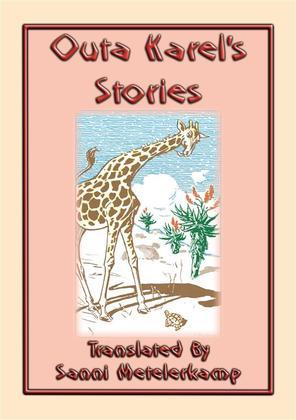 Herein are 15 stories and tales from the Southern most tip of Africa narrated by Outa Karel (Old Charles). Translated and retold by Sanni Metelerkamp who commences the narration with a description of “The Place and the People” which is a story in itself and sets the tone and background to the whole book. A common theme throught is the Trickster Jackal, not too dissimilar to the role played by the Coyote in American Indian tales and Anansi, the Trickster Spider in West African tales.

You will then find 14 more South African tales. Stories like “Why the Hyena is Lame” – a story of why, when first seen walking, the Hyena gives the impression that it is lame and the role the Jackal played in bringing this about. Also, “Why the Heron has a Crooked Neck” – a story how the crook in the Heron’s neck came about and how the devious Jackal, once again, had a part to play. There are also the Hottentot (Bushman) tales of “The Sun” and “The Stars and the Stars’ Road” which when first documented surprised the original recorders, as who would have thought the Bushmen would have tales of the origin of the stars and planets. Indeed in Bleek and Lloyd’s work Specimens of Bushman Folklore they recount the tale of “The Girl Of The Early Race, Who Made Stars” and also a poem of “Sirius And Canopus”!

Metelerkamp states in the foreword that “These tales are the common property of every country child in South Africa” - and so they are and have been since the region was first populated thousands of years ago. We invite you to sit back in a comfy chair of a cold, crisp evening, a steaming hot beverage in hand and enjoy this sliver of South African folklore and culture from an age long past and almost forgotten.

10% of the net profit from the sale of this book will be donated to the Sentabale charity supporting children in Lesotho orphaned by AIDS.