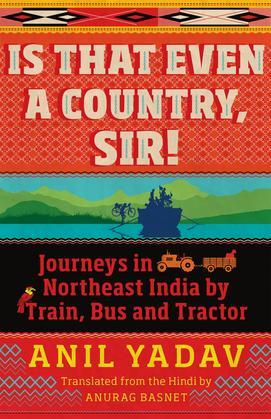 Is That Even a Country, Sir!: Journeys in Northeast India by Train, Bus and Tractor

‘The story of India’s most neglected region told by the narrative voice of a poor, petulant reporter… Stripped of the exotic, the Northeast in [this book] appears bare, burnt and betrayed…’

When violence broke out before elections in Assam in 2000, in which Hindi-speakers from North India were massacred, two out-of-work journalists, Anil Yadav and Anhes Shashwat, decided to go there, braving violence and uncertainty, with the hope that their despatches would make them famous. At that time, they had very little knowledge about Northeast India and no strategy for their trip; they had few contacts, and very little money.

On 29 November 2000, the pair embarked on what became an epic journey in which they crisscrossed Assam, Meghalaya, Nagaland, Arunachal Pradesh, Tripura and Manipur, staying in rundown hotels and guesthouses, and in the homes of friends and strangers. They travelled by local buses through ambushes, they were forced to walk halfway down the highway from Shillong to Guwahati and, on one memorable occasion on the road to Sibsagar, Anil shared a tractor with a herd of goats.

They encountered, among others, a boatman on the Brahmaputra who clearly explained to them the politics behind the massacres of Hindi-speakers; former members of the ULFA who told them why they had surrendered; a former general of Zapu Phizo’s separatist army in Kohima who described to them his gruelling march through virgin forest to China; a murderous raid in Shillong which gave them a glimpse of the insider-versus-outsider equation in Meghalaya; a Manipuri sculptor with whom Anil travelled to Tripura, and who had to be rescued from the Army; and a barber who told them why an elephant was butchered by a mob in Dimapur.

Written with rare power and candour, Is That Even a Country, Sir! weaves history, politics, myth and gritty ground-zero reportage into an unprecedented and unforgettable portrait of Northeast India.