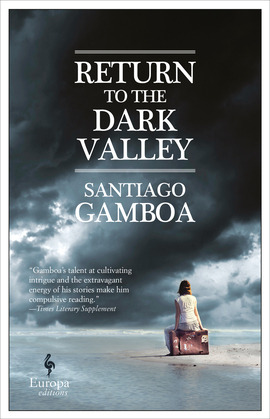 Return to the Dark Valley

Santiago Gamboa is one of Colombia's most exciting writers. In the manner of Roberto Bolano, Gamboa infuses his kaleidoscopic, cosmopolitan stories with a dose of inky dark noir that makes his novels intensely readable, his characters unforgettable, and his style influential.

Return to the Dark Valley tells the stories of four immigrants united by their need to return to their place of origin and exact vengeance. Manuela Beltra?n, a woman haunted by a troubled childhood she tries to escape through books and poetry; Tertuliano, an Argentine preacher who claims to be the Pope's son, ready to resort to extreme methods to create a harmonious society; Ferdinand Palacios, a Colombian priest with a dark paramilitary past now confronted with his guilt; Rimbaud, the precocious, brilliant poet whose life was incessant exploration; Juana and the consul, central characters in Gamboa's Night Prayers, who are united in a relationship based equally on hurt and need. These characters animate Gamboa's richly imagined portrait of a turbulent world where liberation is found in perpetual movement and determined exploration.

“Gamboa's talent at cultivating intrigue and the extravagant energy of his stories make him compulsive reading.”
—Times Literary Supplement