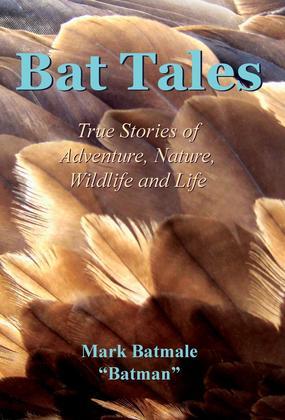 Mark Batmale is a lifelong adventurer with a sense of humor and a gentle spirit. In his true stories he introduces a host of memorable characters, ranging from the genteel to the hardcore. Batmale masterfully weaves tales of excitement, wonder, humor, heart and triumph.

Bat Tales will bring you to the edge of an erupting volcano in Guatemala, with red-hot rocks whizzing by; to Switzerland where one step too many triggers an avalanche and to an old bridge where a kayaker is willingly thrown off. There’s also a trip to Lava Falls in the Grand Canyon for a ridiculous stunt and to Colorado for a quirky triathlon that descends 9,000 vertical feet.

The reader will meet a pair of six-year-old girls, one holding a pink butterfly net and the other sitting on a pink Barbie bike. There’s a paraglider pilot who disappears in the Alps and a skier who makes a gut-wrenching descending of an ever steepening couloir, with no idea where it is leading. We meet a long distance backpacker with a lonely heart on his seventeenth 1000-mile walk, an exuberant slang-slinging Aussie, and a scantily clad huntress hassling a porcupine in the Yukon.

The author's compassion for wildlife is portrayed in his encounters with a tragic pair of mated golden eagles, a bear slurping chocolate milk who becomes seriously irritated when interrupted, and two rattlesnakes, one resting but the other startled and agitated. There is an owl and a skunk in grave predicaments along with a gray jay dangling from a fishing line.

A short campfire “sermon” by a wacky “preacher” which might spark the reader’s curiosity about the universe, and a boneheaded incident with a porcupine that may have the reader wonder about karma.

Batmale regales us an account of the most dramatic meteor shower in half a century. He also shares stories of rescues. Some are simple but in one the author lives up to his childhood nickname, Batman.

One doesn’t need to be an adrenaline junkie or outdoor enthusiast to enjoy this collection. The stories have a life component that many people can relate to. Bat Tales is written with a sense of humor and the author freely shares a few of his mistakes and mishaps.