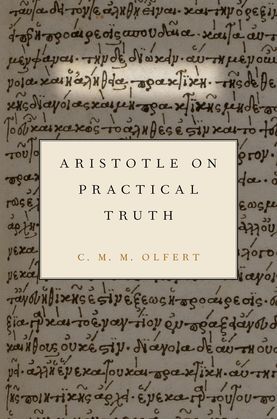 Aristotle's theories of truth, practical reasoning, and action are some of the most influential theories in the history of philosophy. It is surprising, then, that so little attention has been given to his notion of practical truth. In Aristotle on Practical Truth, C.M.M. Olfert gives the first book-length treatment of this notion and the role of truth in our practical lives overall. She offers a novel account of practical truth: practical truth is the distinguishing function (ergon) of our capacity for practical reason, and it is a special kind of truth which shares a standard of correctness with our desires. According to this account, practical truth is the truth about what is good simpliciter (hapl?s) for a particular person in her particular situation. As such, it conforms to Aristotle's technical theory of truth. Olfert argues that, understood in this way, Aristotle's notion of practical truth is an attractive idea that illuminates the core of his practical philosophy. But it is also an idea that challenges a common view, often attributed to Aristotle, that in practical reasoning, we aim at action or acting well as our primary goals, while in theoretical reasoning, we aim primarily at truth and knowledge. Olfert shows that in dialogues such as Charmides, Protagoras, and Republic, Plato describes practical reasoning as being concerned equally and inseparably with grasping the truth and with acting well. She then argues that Aristotle develops this Platonic picture with his notion of practical truth, and with a technical notion of rational action as fitting ourselves to the world. Using key texts from the Nicomachean and Eudemian Ethics, as well as De Anima, Metaphysics, De Interpretatione and Categories, among others, Olfert demonstrates that practical truth deserves to be taken seriously as a central and plausible Aristotelian idea.