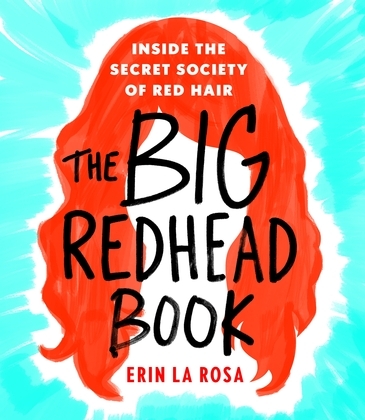 The Big Redhead Book: Inside the Secret Society of Red Hair is an inside look into one of the most elite societies in the world?the real two percent. Well, you know, the two percent of the world's population that are natural redheads, at least. This book has equal parts pop culture, ginger facts, and humorous stories about what it's like to actually have red hair. It's loaded with everything you'd ever want to know about us reds; how we're scientifically different from the norms (non-redheads), how we've been stereotyped in pop culture, and the do's and don'ts of having a red in your life, among other things!
Whether you are a redhead, know a redhead, or are just an enthusiast, this book explores the realities, the myths, and where red hair actually originates (it?s not Ireland). Author Erin La Rosa not only delivers the facts, statistics, and undeniable realities of being a ginger, but she also weaves in her own personal and hilarious stories about being red. Being a redhead is not just a hair color, it?s a lifestyle?and this book is your own exclusive peek into that fabulous world.
Some surprising facts about redheads that you will discover include:
- The association between redheads and humor came from redheaded slaves in ancient Greece
- There are over 30 leading or recurring redhead characters in Disney and Pixar films... that's a lot when you remember we're only two percent of the world's population!
- Redhead women allegedly have more sex, more threesomes, and more orgasms than other women... or do they? Let's find out!
- Some Egyptian rulers dyed their hair red to assert their power (looking at you, Cleopatra)
- And redheads need more anesthesia at the dentist, because they're not going down without a fight