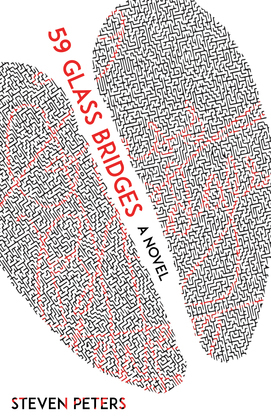 In 59 Glass Bridges, an unnamed narrator travels through a maze that is at once mutable and immutable: walls fall to vine-filled forests, hallways to rivers, bridges to lamp-lit boats. What remains is the desire to escape. He is led along his harrowing path by Willow, a mysterious figure who cajoles him and responds to questions in a winking sphinx-like manner, with answers that are often more baffling than clear. Interspersed are the memories of the narrator, of his childhood and adolescence, and of his grandmother, a wise artist who at once pushes his creativity, while leaving him the freedom to craft his own journey.

Playing with the imagery and landscapes reminiscent of Dante Alighieri?s Divine Comedy, Steven Peters? debut reveals how pivotal moments in our lives give substance and shape to the labyrinths in our minds.

"Peters offers a strangely compelling tale of postmodern disorientation and salvation, one with roots in a past that it acknowledges as authoritative, but to whose authority it refuses to surrender definitive interpretive prerogative. This is a powerful work from an extremely promising writer."
~ Stephen Dunning, Canadian Literature

"59 Glass Bridges is, by far, one of the most memorable reads I?ve enjoyed in a long time."
~ Deborah Vail, PRISM international

"59 Glass Bridges is pleasingly raw and exuberant in its execution..."
~ Aaron Shepard, The Malahat Review