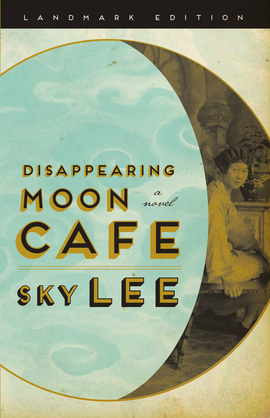 by Sky Lee (Author)
Buy for $11.99
Fiction Literary English literature American and Canadian literature
warning_amber
One or more licenses for this book have been acquired by your organisation details

Disappearing Moon Cafe was a stunning debut novel that has become a Canadian literary classic. An unflinchingly honest portrait of a Chinese Canadian family that pulses with life and moral tensions, this family saga takes the reader from the wilderness in nineteenth-century British Columbia to late twentieth-century Hong Kong, to Vancouver’s Chinatown.

Intricate and lyrical, suspenseful and emotionally rich, it is a riveting story of four generations of women whose lives are haunted by the secrets and lies of their ancestors but also by the racial divides and discrimination that shaped the lives of the first generation of Chinese immigrants to Canada.

Each character, intimately drawn through Lee’s richness of imagery and language, must navigate a world that remains inexorably “double”: Chinese and Canadian. About buried bones and secrets, unrequited desires and misbegotten love, murder and scandal, failure and success, the plot reveals a compelling microcosm of the history of race and gender relations in this country.

“Powerfully and elaborately wrought, Lee’s first novel traces generations of a Chinese-Canadian family and their ties to (and clashes with) one another, their culture, and their land in China and North America . . . the layers of experience, emotion and cultural identity of succeeding generations build to an abundantly detailed story.”
~ Publishers Weekly

“This ambitious and vastly entertaining first novel follows four generations of a troubled Chinese-Canadian family through its gradual and often painful assimilation and eventual disintegration . . . The lively, often riotous spirit of Disappearing Moon Cafe is never lost in the epic sprawl. This is a moving, deeply human tale about the high price of assimilation, the loneliness of being of two cultures but no longer really belonging to either and the way in which the sordid secrets of the past can cast long, tragic shadows . . . If Gabriel Garcia Marquez had been Canadian-Chinese, and a woman, A Hundred Years of Solitude might have come out a little bit like this.”
~ Washington Post Book World