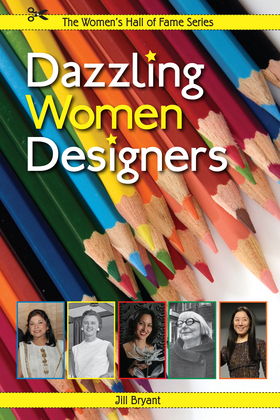 The work of women designers touches every part of our lives. In the 1920s British furniture designer and architect Eileen Gray developed ideas for homes that still seem modern today. From chairs made of steel tubes to bare-basic rooms, she created an entirely new look. American Suzanne E. Vanderbilt was one of the first women to design cars for General Motors. Designer of cities Jane Jacobs caused controversy in the 1960s with her campaign against a New York expressway that revolutionized the way we understand urban life. And designer Ritu Kumar, known as ?the grand woman of Indian fashion,? is celebrated for bringing the beautiful tradition of embroidery to modern clothes.
The other designers profiled in this inspiring collection are landscape architect Cornelia Hahn Oberlander, roboticist Cynthia Breazeal, costume designer Eiko Ishioka, interior designer Aissa Dione, fashion designer Vera Wang, and architect Zaha Hadid. By including designers who are household names as well as those who young readers may not have heard of, Dynamic Women Designers offers a well-rounded introduction to the women who shape our world.