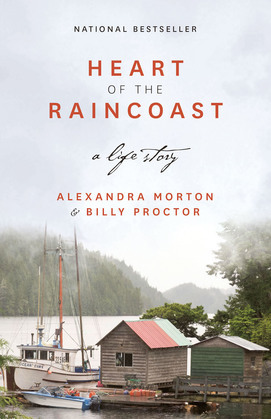 Heart of the Raincoast

Originally published in 1998, this updated edition has a brand-new cover and interior design, with a new foreword by Alexandra Morton.

Billy Proctor was born in 1934 and has spent his entire life in a remote coastal community called Echo Bay, BC on an island off northern Vancouver Island. Proctor has always done the time-honoured work of generations of upcoast men—hand-logging, fishing, clam digging, repairing boats, beachcombing.

But Billy eventually began to notice that the thriving runs of Pacific salmon, oolichans, and herring that he remembers from his early years were vanishing—some to near extinction—and he understood that it was time to take action.

Heart of the Raincoast is the fascinating story of Billy Proctor’s life, and the wealth of knowledge and understanding that can only be gained from living in such close proximity to nature. The writing is funny, touching and honest—and offers an engaging insider’s view not only of the salmon, whales, eagles and independent people who populate Canada’s wild and lovely coastal rainforest, but on what we need to do to keep it as nature intended.