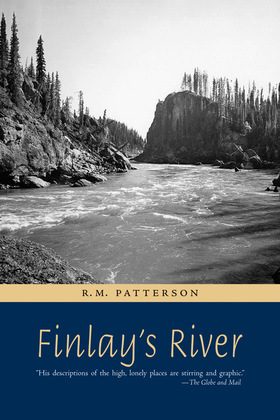 In Finlay's River, R. M. Patterson, whose style was described by noted author Bruce Hutchison as a a mixture between Thoreau and Jack London, tells the story of his 1949 trip up this wild river in remote northern British Columbia. Patterson uses his own journey as a framework to recount the adventures of explorers who went there before. All had struggled up the Finlay for different reasons, and all left spirited accounts of that challenging, doomed river, which Patterson brings to vivid life again.

Much of the Finlay, a river of whitewater rapids that flowed through a magnificent country of dense forests and high mountains, disappeared forever under the waters of Williston Lake with the completion of the W. A. C. Bennett Dam in 1968. In this engaging book, Patterson preserves the memory of this wilderness and the long-gone adventurers who first told the world about its existence.