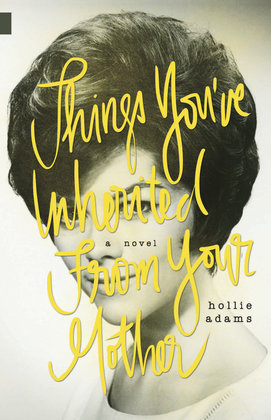 Things You've Inherited From Your Mother

Everyone deals with grief in their own personal way. Take Carrie, for example. Getting over her mother?s death from ovarian cancer takes the form of ramping up passive-aggressive office warfare, continuing her campaign to show her ex-husband she?s over him (further increasing the distance between herself and her teenage daughter, natch), ridding herself of her mother?s overweight cat Poncho, and consuming heroic quantities of red wine, spiked coffee and coffin nails. Nobody?s perfect.

Situated at the midpoint between the booze-soaked mayhem of Absolutely Fabulous and the middle-aged ennui of Anakana Schofield?s Malarky, Things You?ve Inherited From Your Mother is a riotous assemblage of found objects, Choose Your Own Adventure-style in jokes and useful facts about mice. In her startlingly funny first novel, Hollie Adams takes the conventional wisdom about ?likeable? literary heroines and shoves it down an elevator shaft.

Praise for Things You've Inherited From Your Mother

"Hollie Adams has boldly tossed most first-novel conventions out the window."
~ Traci Skuce, The Coastal Spectator

"At its best, Things You've Inherited From Your Mother realizes the inability of some people - we all know one or two - to be authentic, with the genuine humanity behind their smarminess only peeking through in times of disaster."
~ Bryn Evans, Alberta Views