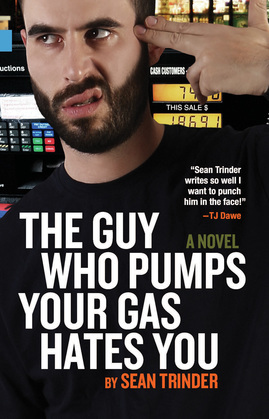 The Guy Who Pumps Your Gas Hates You

by Sean Trinder (Author)
Buy for $11.99
Fiction Literary Humorous
warning_amber
One or more licenses for this book have been acquired by your organisation details

“No one should ever work at a gas station long enough to get good at it,” observes Brendan, the narrator of the debut novel from Sean Trinder.

Brendan is 20. He’s been pumping gas for three years, working the evening shift at the CountryGas station in a small town outside of Winnipeg. He’s gotten good at it. Which is sad. And Brendan knows that unless something happens fast, he’ll be stuck in this rut forever, inhaling gas fumes and quietly seething at the idiot customers endlessly parading past him. Will the writing course he’s signed up for at the local university—and the older woman he meets there—be enough to get Brendan’s life back on track?

In The Guy Who Pumps Your Gas Hates You, Sean Trinder combines the profane humour of Kevin Smith with the big-hearted charm of Nick Hornby, while creating a uniquely winning character whose hard-won journey away from the gas station and into adulthood is impossible not to root for.

Praise for The Guy Who Pumps Your Gas Hates You

An unusual story about romantic, familial, and self love. Reality Bites redefined for the Twitter generation."
~ Angie Abdou, Quill and Quire

"This is a fun and entertaining tale."
~ Publishers Weekly

Other features and hazards     keyboard_arrow_right
2450219
item