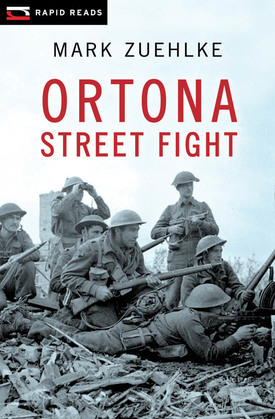 by Mark Zuehlke (Author)
Buy for $4.99 Excerpt
Nonfiction History World War II History by country Europe Italy 1945-1989
warning_amber
One or more licenses for this book have been acquired by your organisation details

December 20, 1943. Two Canadian infantry battalions and a tank regiment stand poised on the outskirts of a small Italian port town. They expect to take Ortona quickly. But the German 1st Parachute Division has other ideas. For reasons unknown, Hitler has ordered Ortona held to the last man. Houses, churches and other buildings are dynamited, clogging the streets with rubble. Germans with machine guns lie in ambush. Snipers slip from one rooftop to another. The Canadians seem to have walked into a death trap. This is a battle fought at close range, often hand to hand. Casualties on both sides are heavy. In the end, raw courage and ingenuity save the Canadians.


Ortona Street Fight is a riveting telling of what is considered one of the most epic battles that Canadian soldiers have ever fought.