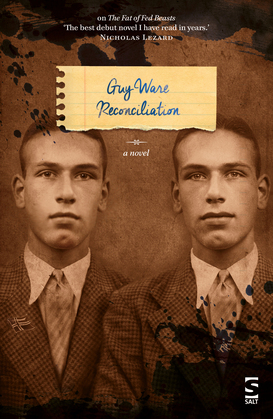 In The Fat of Fed Beasts, Ware played with metaphysics, crime and Beckett to produce a ‘brilliant’ intellectual comedy the Guardian picked as a ‘paperback of the year’. Reconciliation plays similar tricks with the spy-thriller and the family saga, to greater emotional effect.

It is February 2003, the run-up to the Iraq War. Holly Stanton’s father gives her a typescript of the diary her grandfather, an MI6 spy, kept while on the run in occupied Norway. It’s a story she has grown up with. Her partner, Martin, encourages her to write the book, but Holly is unwilling. In the family legend her grandfather was sailed to safety by a ‘brave Norwegian’. Reading the diary, Holly is confronted by a real person, with a name, a family, and a life of his own before and after his role in her grandfather’s story. She wonders what made him sacrifice his family, and what might have happened to them. But Martin’s growing obsession also pushes her to face another question: would a spy on the run have kept a diary that names names?

‘Reconciliation’ is a tricky word: as one character points out, it can mean the outbreak of peace or the auditor’s tallying of accounts. It has a troubled relationship with ‘truth’, as South Africa discovered. Spies and novelists are equally tricky: Reconciliation is laced with historical and geographic inaccuracies. As each layer of the story is peeled back, the inaccuracies are exposed, and we find just how easily we have been misled. In an era of ‘post-truth politics’, this provides a powerful reminder that stories are always lies, but are often still the only truth we have. History is stolen from those who lived it.

The novel begins with an ‘apology’ more slippery than it might appear. Ware’s own grandfather was a spy who kept a diary while on the run in occupied Norway. ‘To suggest otherwise,’ he says – that is, to make a novel of his story – ‘would be unconscionable.’ But he has done it anyway, and the result is a clever, exciting and – ironically – honest account of its own bad faith.