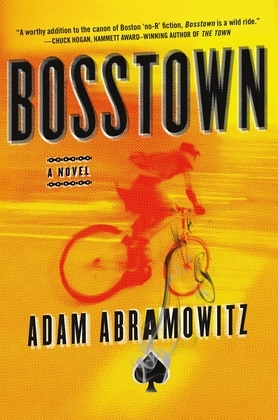 Zesty Meyers is Bosstown's fastest bike messenger--caffeine fueled, wise-cracking and reckless--accustomed to hurtling through Boston's kamikaze streets at breakneck speed, always just a bumper or car door away from disaster.

Will Meyers is Zesty's father, Beantown's former backroom poker king and political fixer, who is suffering from Alzheimer's and a growing dread that the Big Dig, carving its way through some of the city's toughest neighborhoods, will expose the bodies and secrets he'd assumed were buried forever.

When the heist of an armored truck goes violently wrong, Zesty is forced to navigate a gritty underworld of gangsters and blood money, desperately trying to outrace his family's criminal past and stay alive in a changing city where death loiters on every corner and the odds of survival have narrowed to pulling a straight flush on the river.

Adam Abramowitz's Bosstown, a local treat, is a story of harrowing high speeds, desperately high stakes and more twists than a Boston street. For Zesty, it's the toughest ride yet--and every path leads home.