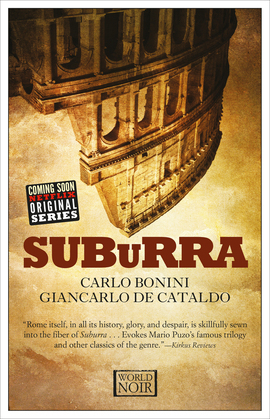 Suburra will be released as a Netflix original series in 2017

Criminals on the rise and senior members of the Italian mafia clash in and around Rome over the backing of an urban development bill that promises to turn the seaside town of Ostia into a gambling paradise. The problems plaguing the political system of contemporary Italy are played out against this florid, cinematic background.

Before the end of Berlusconi's days, a massive real estate development bill that will bury the city's outskirts under tons of cement remains on the floor in the Italian parliament. Ostia, a small dot of a town on the coast, could become Italy's equivalent of Las Vegas with the passing of this renewal project. With Italian MPs either in their pockets or forced to vote because of blackmail or the kidnapping of a loved one, the mafia is set to cash-in on the future of this seaside retreat. The local bosses of Ostia however, tired of staying in their place, feel entitled to a larger cut. When the son of a feared Ostia gangster is brutally stabbed and left lifeless on the streets, the safeties come off and all-out war is sparked. Each vote for the bill, will either be caused by blood or bought by way of bribery.

"In Suburra, the incidents revealed by the Mafia Capitale investigation were already in large part recounted in the vivid and hard tones (here and there with a bit 'splatter,' a la Quentin Tarantino) of 'fiction,' but with the realistic breadth that captures a great city tragically 'delivered' to political, economic and criminal corruption." - La Repubblica