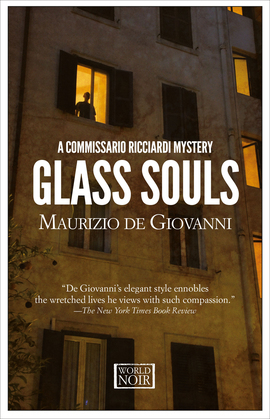 In the abyss of a profound personal crisis, Commissario Ricciardi feels unable to open himself up to life. He has refused the love of both Enrica and Livia and the friendship of his partner, Maione. Contentment for Ricciardi proves as elusive as clues to the latest crime he has been asked to investigate. The beautiful, haughty Bianca, countess of Roccaspina, pleads with Ricciardi to investigate a homicide that was officially closed months ago. In the tense, charged atmosphere of 1930s Italy, where Benito Mussolini and his fascist thugs monitor the police closely, an unauthorized investigation is grounds for immediate dismissal and possible criminal charges. But Ricciardi's thirst for justice cannot be sated. A tightly plotted historical noir novel, this eighth instalment in the Commissario Ricciardi series is a gripping meditation on revenge and justice in which each character's soul reveals itself to be made of glass.

PRAISE FOR THE COMMISSARIO RICCIARDI MYSTERIES:

"The construction of Glass Souls is remarkable. It's like a very sophisticated mosaic in which each protagonist occupies precisely the right amount of space. The powerful rhythm with which the plot develops will surprise readers at every turn." - La Repubblica