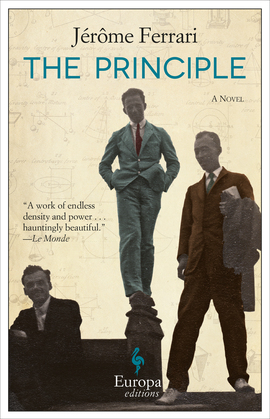 "In this lyrical novel, a young, disenchanted philosopher reckons with the evil at work in the contemporary world by reimagining the life of Werner Heisenberg, the Nobel Prize-winning German physicist infamous for two reasons: revolutionizing quantum mechanics with his “uncertainty principle” at the tender age of twenty-three, and participating in Nazi efforts to build
a nuclear bomb.
The story of the inevitably compromised meeting between a man’s soul and the mysterious beauty of the world, The Principle plumbs the depths of an intellectual giant whose sublime insights into nature did not preclude his cooperation, however ambiguous, with the darkest forces of his day. In an unflinching look at the failings
of European culture, Je?ro?me Ferrari offers
a compelling vision of a fractured, globalized world whose tragedies are rooted in those
of the twentieth century.
The Principle is a poetic glimpse into the mysteries of the physical world and the minds of those who seek to uncover them."