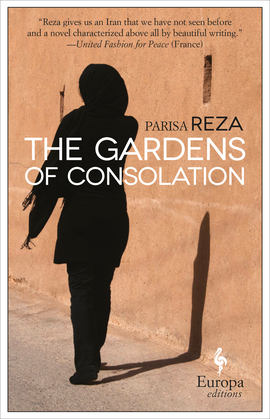 The Gardens of Consolation

A powerful love story unfolds against the backdrop of a rapidly changing Iran.

In the early 1920s in the remote village of Ghamsar, Talla and Sardar, two teenagers dreaming of a better life, fall in love and marry. Sardar brings his young bride with him across the mountains to the suburbs of Tehran, where the couple settles down and builds a home. From the outskirts of the capital city, they will watch as the Qajar dynasty falls and Reza Khan rises to power as Reza Shah Pahlavi. Into this family of illiterate shepherds is born Bahram, a boy whose brilliance and intellectual promise are apparent from a very young age. Through his education, Bahram will become a fervent follower of reformer Mohamed Mossadegh and will participate first hand in his country’s political and social upheavals.

“Parisa Reza reveals herself to be a marvelous storyteller [...], offering us one of the most beautiful texts written in the last 10 years.” —Gascogne FM (France)

“A ‘fable’ told by people from modest circumstances, of an Iran that we have not seen before. And a book that reveals above all beautifully written texts.”—United Fashion for Peace (France)