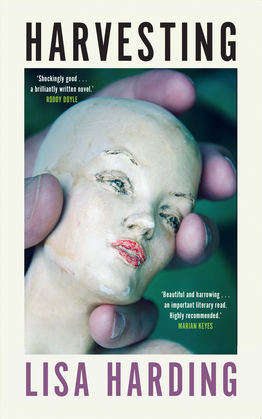 ‘Harvesting is shocking – and shockingly good. It is thought-provoking, anger-provoking, guilt-provoking, and – most importantly – it is a brilliantly written novel.’ – Roddy Doyle

Sometimes it feels as if three minutes has passed when it’s been three days, and three nights pass like a shiver of wind through the trees. I can’t tell shadows from bodies, voices from spirits. Luca’s face becomes an unknown man’s face, me under him, then the man’s face becomes Luca’s and I want to reach out and smash it . . .

Sammy is a spiky, quick-witted and sharp teenager living in Dublin; Nico is a warm and conscientious girl from Moldova. When they are thrown together in a Dublin brothel in a horrific twist of fate, a peculiar and important bond is formed . . .

This is a novel about a flourishing but hidden world, thinly concealed beneath a veneer of normality. It’s about the failings of polite society, the cruelty that can exist in apparently homely surroundings, the bluster of youth and the often appalling weakness of adults.

Harvesting is heartbreaking and funny, gritty, raw and breathtakingly beautiful, where redemption is found in friendship and unexpected acts of kindness.

Harvesting was inspired by Harding’s involvement with a campaign against sex trafficking run by the Children’s Rights Alliance. Although it is a fictionalised account, the text has been read and approved of by representatives for NGOs in both Moldova and Dublin.