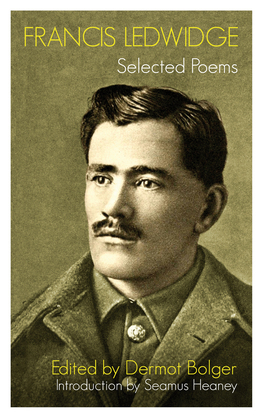 ‘Ledwidge very deliberately chose not to bury his head in local sand and, as a consequence, faced the choices and moral challenges of his times with solitude, honesty and rare courage. This integrity, and its ultimately gratifying effects upon his poetry, should command the renewed interest and respect of the Irish people at the present time …’ – Seamus Heaney

Born in poverty in Slane, County Meath, Ledwidge worked as a farm hand, copper miner and road labourer. In his twenties he would become a rising star in the Irish literary scene, although he lived only to see one collection of his verse in print, receiving his author’s copy while freezing and on starvation rations in Serbia.

Although a staunch Irish Nationalist, he chose to fight in the First World War, where he died just short of his thirtieth birthday – in the inhuman nightmare that was the Third Battle of Ypres.

This selection of Francis Ledwidge’s poems, edited by Dermot Bolger, celebrates a remarkably gifted poet who, one hundred years after his tragic death in Ypres, is perhaps best known for the poetic brilliance of much of his work as well as the circumstances of his death.

Introduced by Seamus Heaney and with an extended afterword by Dermot Bolger, this volume captures the depth and lyric grace of Ledwidge’s finest poems and conjures a moving portrait of an eventful life cut tragically short.