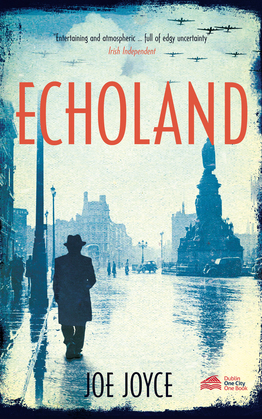 Echoland by Joe Joyce is the chosen title for Dublin: One City One Book 2017

France is teetering on the brink of collapse. British troops are desperately fleeing Dunkirk. Germany appears to be unstoppable. Hitler’s next target is Britain . . . and Ireland. In neutral Ireland opinions are divided. Some sympathise with Germany, others favour Britain, most want to stay out of the war altogether. In this atmosphere of edgy uncertainty, young lieutenant Paul Duggan is drafted into G2, the army’s intelligence division, and gets assigned to the German desk.

He’s given a suspected German spy to investigate, one who doesn’t appear to do much, other than write ambiguous letters to a German intelligence post box in Copenhagen. Before Duggan can probe further, however, his politician uncle charges him with finding his daughter, who’s gone missing, possibly kidnapped. These lines of inquiry take Duggan into the double-dealing worlds of spies and politics, and the truth will challenge everything he has grown up believing.

An addictive thriller that will keep you glued to the page, right through to its heart-pounding finale.