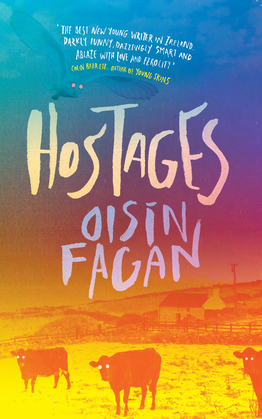 And so I find myself staggering on the streets of Trim again as a thirty-three-year-old man infuriated by a history that is a joke I am trying to stop laughing at and bemoaning a future that I didn’t bother creating, knowing that all the dead peasants who precede me aren’t allotted a word a corpse, and that if the dead could speak they would be screaming. My heart is broken and my failure is total.

A bomb is born, lives and dies in a rural secondary school; Ireland becomes a dumping ground for corpses; one family’s genealogy begins in tragedy in 1574 and ends in something far worse in 2111; a strange tribal matriarchy on the banks of the River Boyne is threatened with extermination.

Over the course of these stories, the world breaks down in an endless cycle of hunger, desperation, violence and domination, and we find a humanity left tender, collapsed, and full of a beautiful, primeval innocence.

Fagan’s raw blend of verve, humour, imagination and warmth surges through these pages, revealing a world rendered both hopeful and disturbing, human and other, that is at once familiar and extraordinary.