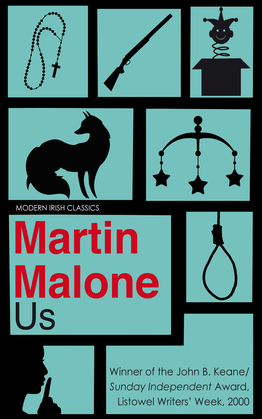 ‘An unusual family, US. There’s Dad, who isn’t here but whose shadow is, Mum who is here but whose heart is broken. There’s Gina who’s sad and Karen who’s not. There’s Victor who’s intelligent and me who isn’t. There was Adam too, who hurt us more than we imagined we could be hurt …’

Us deals with a family’s struggle to survive and keep a grip on sanity when the unspeakable is spoken and its darkest secrets come to light. Set in the Curragh of Kildare against a backdrop of sheep-farming and horse-racing, Us gives a powerful voice to a hidden Ireland.

Us was Martin Malone’s first novel, which won the John B Keane/Sunday Independent award at Listowel Writers Week when first published in 2000. New Island is delighted to republish it as part of its Modern Irish Classics series, which aims to give a new lease of life to some of the best of Irish writing of the last fifty years.