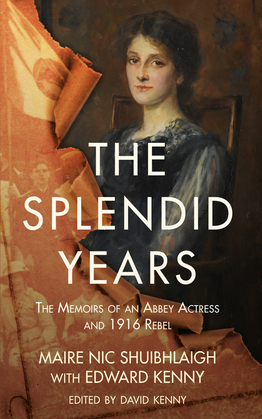 Maire Nic Shiubhlaigh was a founder actress of the Abbey Theatre and its first leading lady on its opening in 1904, when she played the title role in W. B. Yeats’s Kathleen Ni Houlihan. On that night, five members of her family were acting and working in the theatre. Her beauty and talent captivated audiences and critics at home and abroad. Portrait artists queued up to paint her. Revolutionaries and poets wrote plays for her. The Pearse brothers, AE, Countess Markievicz, Maud Gonne, J. M. Synge and John B. Yeats counted among her admirers.

The Splendid Years – with a foreword by Padraic Colum – is Maire’s first-hand account of some of the momentous events that shaped Irish history: including the establishment of the Abbey Theatre and her role as leader of the Cumann na mBan ‘girls’ in Jacob’s Biscuit Factory during the Rising. Withdrawn from print just weeks after its initial publication in the 1950s, the story of this remarkable and inspiring Irishwoman is available again, with new and never-before-seen material.

Here we have Pearse imitating Yeats onstage; J. M. Synge rolling cigarettes for his actors; Maire’s aged father printing the War News in 1916; her marriage to Major General Bob Price, and a lost portion of her story, detailing her childhood in Carlow before her rebellious, Parnellite family was run out of town by the clergy.