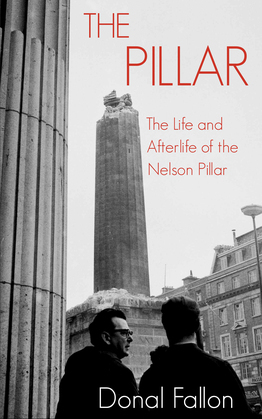 On 8 March 1966, Irish republicans blew up Dublin’s Nelson Pillar, which had stood for over 150 years, irrevocably changing the landscape of the city.

No monument in the history of Ireland has proven quite as controversial as the Nelson Pillar on O'Connell Street. The story of the Pillar and its location involves many famous Dublin names and characters, from Arthur Guinness to James Joyce, and WB Yeats to The Dubliners. This book examines the life of the Nelson Pillar site, looking at what was there before the monument as well as the afterlife of the Pillar, and brings the story right up to its eventual replacement with the Spire of Light.

DONAL FALLON writes primarily on the social history of the Irish capital. A tour guide of the city, he also teaches at University College Dublin. He has contributed to The History Show, History Ireland, The Dubliner and the Sunday Independent, as well as appearing at events like The History Festival of Ireland. His first book, Come Here To Me! (with Sam McGrath and Ciarán Murray) was published by New Island Books in 2012.