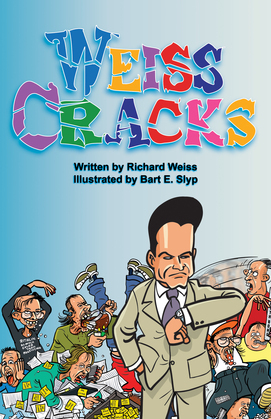 Weiss Cracks, how it began: Upon moving to Palm Springs in the summer of 2012, standup comedian Richard Weiss hooked up with the talents of wacky artist Bart E. Slyp. The two immediately hit it off and launched their hilarious comic strip, Weiss Cracks, which was picked up and published by the CV WEEKLY newspaper, where it received rave reviews from residents of the Coachella Valley in California. ?It was Bart?s idea to include me in many of the strips,? said Richard, ?something I had not initially thought of... but it turned out to be brilliant. I could now take my standup act, incorporated with real life situations, and depict them to the masses without even getting on stage. Bartabulous and I are like Elton John and Bernie Taupin, the sum is greater than its parts.? As you gaze through the pages of Richard and Bart?s first book release, you?ll enter a world where anything and everything goes. As one reader exclaimed after reading Weiss Cracks, ?It?s pure comic genius.? Enjoy reading. About the Author: Richard Weiss is described by one observer as a performer who is pure heart and soul. "His body language on stage is so grounded and positive. All feeling. No ego." Weiss, a recovering alcoholic and cocaine addict from New York City, came to Riverside, California to attend a rehab facility as a result of a family intervention. In 2006, shortly after his first year clean and sober, Richard began writing comedy and recently did the "Standup to Addiction" show, where he toured the country to sold-out shows. Grateful to be clean and sober, Weiss feels blessed that he can share his experiences with others in a humorous vein. When asked his view on doing recovery comedy, he responded, "Laughter is a great healer. I want them to have what I've found. As they say, 'You can't keep it, unless you give it away.'"