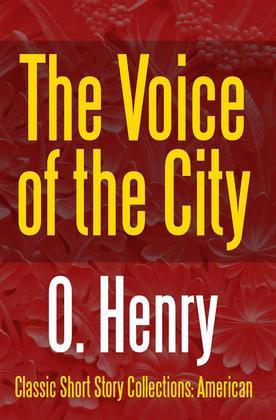 The Voice of the City

This collection of short stories is a sequel (or bookend set) to The Four Million. Set in New York City at the dawn of the twentieth century, including stories of the idle rich, the hardworking middle class, and the hopeless poor. Readers will enjoy rubbing shoulders with outlaws and commiserating with thwarted lovers--all the while looking forward to the author's trademark surprise endings.

William Sydney Porter (September 11, 1862 - June 5, 1910), known by his pen name O. Henry, was an American short story writer. He was born in Greensboro, North Carolina. He changed the spelling of his middle name to Sydney in 1898.

Further Tales of the Four Million: The Complete Life of John Hopkins; A Lickpenny Lover; Dougherty's Eye Opener; Little Speck in Garnered Fruit; The Harbinger; While the Auto Waits; A Comedy in Rubber; One Thousand Dollars; The Defeat of the City; The Shocks of Doom; The Plutonian Fire; Nemesis and the Candy Man; Squaring the Circle; Roses Ruses and Romance; The City of Dreadful Night; The Easter of the Soul; The Fook Killer; Transients in Arcadia; The Rathskeller and the Rose; The Clarion Call; Extradited from Bohemia; A Philistine in Bohemia; From Each According to His Ability; The Memento; and the title story.

THE VOICE OF THE CITY (Excerpt)

Twenty-five years ago the school children used to chant their lessons. The manner of their delivery was a singsong recitative between the utterance of an Episcopal minister and the drone of a tired sawmill. I mean no disrespect. We must have lumber and sawdust.

I remember one beautiful and instructive little lyric that emanated from the physiology class. The most striking line of it was this:

"The shin-bone is the long-est bone in the hu-man bod-y."

What an inestimable boon it would have been if all the corporeal and spiritual facts pertaining to man had thus been tunefully and logically inculcated in our youthful minds! But what we gained in anatomy, music and philosophy was meagre.

The other day I became confused. I needed a ray of light. I turned back to those school days for aid. But in all the nasal harmonies we whined forth from those hard benches I could not recall one that treated of the voice of agglomerated mankind.

In other words, of the composite vocal message of massed humanity.

In other words, of the Voice of a Big City.

Now, the individual voice is not lacking. We can understand the song of the poet, the ripple of the brook, the meaning of the man who wants $5 until next Monday, the inscriptions on the tombs of the Pharaohs, the language of flowers, the "step lively" of the conductor, and the prelude of the milk cans at 4 a. m. Certain large-eared ones even assert that they are wise to the vibrations of the tympanum produced by concussion of the air emanating from Mr. H. James. But who can comprehend the meaning of the voice of the city?

I went out for to see.

First, I asked Aurelia. She wore white Swiss and a hat with flowers on it, and ribbons and ends of things fluttered here and there...