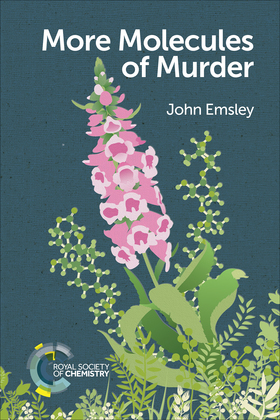 by John Emsley (Author)
Buy for $25.00 Excerpt
Nonfiction Science and technics Science Chemistry Analytic Others History
warning_amber
One or more licenses for this book have been acquired by your organisation details

How can a plant as beautiful as the foxglove be so deadly and yet for more than a century be used to treat heart disease? The same is true of other naturally occurring molecules as will be revealed in this current book by award-winning author and chemist, John Emsley.

More Molecules of Murder follows on from his highly-acclaimed earlier book Molecules of Murder, and again it deals with 14 potential poisons; seven of which are man-made and seven of which are natural. It investigates the crimes committed with them, not from the point of view of the murderers, their victims, or the detectives, but from the poison used. In so doing it throws new light on how these crimes were carried out and ultimately how the perpetrators were uncovered and brought to justice.

Each chapter starts by looking at the target molecule itself, its discovery, its chemistry, its often-surprising use in medicine, its effects on the human body, and its toxicology. The rest of the chapter is devoted to murders and attempted murders in which it has been used. But, be reassured that murder by poison is not the threat it once was, thanks to laws which restrict access to such materials and to the skills of analytical chemists in detecting their presence in incredibly tiny amounts.