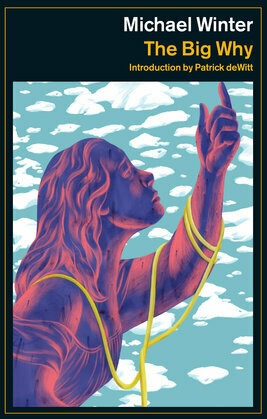 The Big Why: A Novel

by Michael Winter (Author)
Fiction Literary English literature American and Canadian literature
Michael Winter's The Big Why takes the tradition of the historical novel and twists it into the cool, sinuous, entertaining shape we’ve all been waiting for. His characters are real and from the past, but the lives they live feel contemporary and emotionally modern.

Winter’s version of the American artist Rockwell Kent is an over aged, erotically fleckless Huck Finn ready to leave the superficial art world of New York and light out for the territory. Only he heads the wrong way: north and east to Brigus, Newfoundland, before and at the beginning of World War One. A socialist and a philanderer, certain in the greatness of his work, he is drawn north by a fascination for the rocky Atlantic coast and by the example of Brigus's other well-known resident, fabled Arctic explorer Robert Bartlett. But once in Newfoundland, Kent discovers that notoriety is even easier to achieve in a small town than in New York. As events come to a head both internationally and domestically and the war begins, Kent becomes a polarizing figure in this intimate, impoverished community, where everyone knows everyone and any outsider is suspect, possibly even a German spy.

Writing in Kent's voice, Michael Winter delivers a passionate, witty, and cerebral exploration of what makes exceptional individuals who they are—and why.