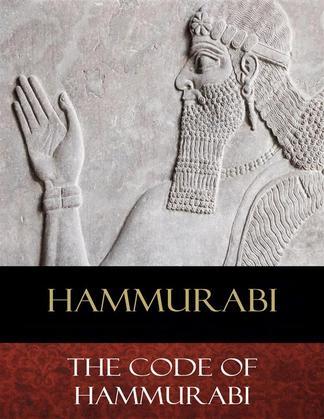 The Code of Hammurabi

The Code of Hammurabi is a well-preserved Babylonian law code of ancient Mesopotamia, dating back to about 1754 BC. It is one of the oldest deciphered writings of significant length in the world. The sixth Babylonian king, Hammurabi, enacted the code, and partial copies exist on a man-sized stone stele and various clay tablets. The Code consists of 282 laws, with scaled punishments, adjusting "an eye for an eye, a tooth for a tooth" (lex talionis) as graded depending on social status, of slave versus free man.

Nearly one-half of the Code deals with matters of contract, establishing, for example, the wages to be paid to an ox driver or a surgeon. Other provisions set the terms of a transaction, establishing the liability of a builder for a house that collapses, for example, or property that is damaged while left in the care of another. A third of the code addresses issues concerning household and family relationships such as inheritance, divorce, paternity, and sexual behavior.

Only one provision appears to impose obligations on an official; this provision establishes that a judge who reaches an incorrect decision is to be fined and removed from the bench permanently. A few provisions address issues related to military service.

Hammurabi ruled for nearly 42 years, c. 1792 to 1750 BC according to the Middle chronology. In the preface to the law, he states, "Anu and Bel called by name me, Hammurabi, the exalted prince, who feared Marduk, the patron god of Babylon (The Human Record, Andrea & Overfield 2005), to bring about the rule in the land." On the stone slab there are 44 columns and 28 paragraphs that contained 282 laws. The laws follow along the rules of 'an eye for an eye'.