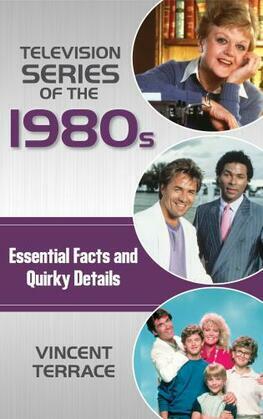 Television Series of the 1980s

Television screens in the 1980s reflected some of the most memorable programs of all time. In that decade, such critically acclaimed shows as Cheers, The Golden Girls, Hill Street Blues, Newhart, and St. Elsewhere debuted. In that same decade, iconic shows like The A-Team, Baywatch, Cagney & Lacey, Knight Rider, MacGyver,Miami Vice, and Roseanne appealed to millions of viewers. Even after these shows departed the airwaves, they live on in syndication and on DVDs, entertaining many generations of viewers.

In Television Series of the 1980s: Essential Facts and Quirky Details, Vincent Terrace presents readers with a cornucopia of information about more than seventy programs from the decade. For example, did you know that Sam Malone had an ex-wife named Deborah? Or that MacGyver’s alias was Dexter Fillmore? Or Dan Fielding’s license plate on Night Court read “Hot to Trot”? These are just a handful of hundreds of fun and intriguing specifics found inside this volume. Programs from all four major networks (ABC, CBS, FOX, and NBC)—as well as select syndicated programs—are represented here.

This is not a book of opinions or essays about specific television programs but a treasure trove of facts associated with each show. From the name of Roseanne’s diner to the title of Jessica Fletcher’s first novel, readers will discover a wealth of fascinating information that, for the most part, cannot be found elsewhere. In some cases, the factual data detailed herein is the only such documentation that currently exists on bygone shows of the era. Television Series of the 1980s is the ideal reference for fans of this decade and anyone looking to stump even the most knowledgeable trivia expert.