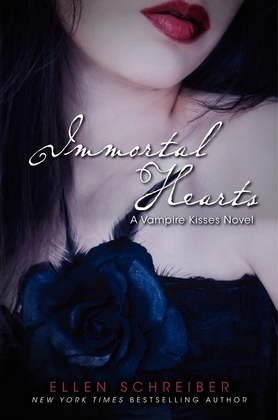 In Immortal Hearts from the popular Vampire Kisses series by Ellen Schreiber, Alexander’s little sister Athena “Stormy” Sterling comes to Dullsville, stirring up the immortal world. Her visit gives teen goth-girl Raven a clearer picture of what life as a member of Alexander’s vampire family would be like.

Nothing she sees lessens her desire to become a vampire. She adores Alexander. She’s sure spending every night with him and sleeping in his arms in his coffin every day would be the perfect life. But she hasn’t been able to convince her vampire love that he should turn her. At least not yet…