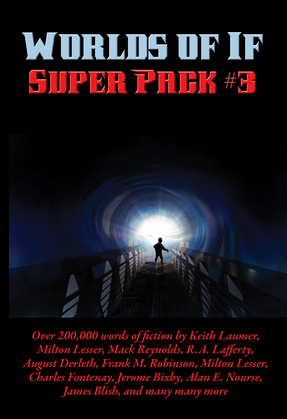 Worlds of If Super Pack #3

Worlds of If was a three time winner of the Hugo Award for best science fiction magazine. Worlds of If discovered many talented writers who would go on to dominate genre fiction. This is the third in our Worlds of If series with even more memorable stories from its tremendous run.

?The Yillian Way? by Keith Laumer
?Homo Inferior? by Mari Wolf
?The Talkative Tree? by H.B. Fyfe
?Show Business? by Boyd Ellanby
?The One and the Many? by Milton Lesser
?The Stowaway? by Alvin Heiner
?Sound of Terror? by Don Berry
?Planet of Dreams? by James McKimmey, Jr
?Off Course? by Mack Reynolds
?Thy Name Is Woman? by Kenneth O'Hara
?Uniform of a Man? by Dave Dryfoos
?The Planet with No Nightmare? by Jim Harmon
?The Kenzie Report? by Mark Clifton
?The Six Fingers of Time? by R.A. Lafferty
?Fly? by Night? by Arthur Dekker Savage
?Lonesome Hearts? by Russ Winterbotham
?Double Take? by Richard Wilson
?McIlvaine's Star? by August Derleth
?An Empty Bottle? by Mari Wolf
?Progress Report? by Mark Clifton and Alex Apostolides
?The Peacemaker? by Alfred Coppel
?The Worlds of Joe Shannon? by Frank M. Robinson
??Mid Pleasures and Palaces? by James McKimmey, Jr.
?The Clean and Wholesome Land? by Ralph Sholto
?Weak on Square Roots? by Russell Burton
?Black Eyes and the Daily Grind? by Milton Lesser
?Sinister Paradise? by Robert Moore Williams
?Pipe of Peace? by James McKimmey, Jr.
?Atom Drive? by Charles Fontenay
?DP? by Arthur Dekker Savage
?Forsyte?s Retreat? by Winston Marks
?Where There?s Hope? by Jerome Bixby
?The Day of the Dog? by Andersen Horne
?Meeting of the Board? by Alan E. Nourse
?Holes Incorporated? by L. Major Reynolds
?The Thing in the Attic? by James Blish
?To Choke an Ocean? by J. F. Bone
?Gambler?s World? by Keith Laumer