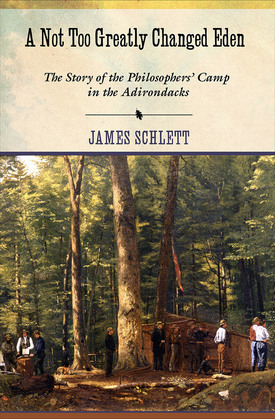 A Not Too Greatly Changed Eden

In August 1858, William James Stillman, a painter and founding editor of the acclaimed but short-lived art journal The Crayon, organized a camping expedition for some of America's preeminent intellectuals to Follensby Pond in the Adirondacks. Dubbed the "Philosophers’ Camp," the trip included the Swiss American scientist and Harvard College professor Jean Louis Rodolphe Agassiz, the Republican lawyer and future U.S. attorney general Ebenezer Rockwood Hoar, the Cambridge poet James Russell Lowell, and the transcendental philosopher Ralph Waldo Emerson, who would later pen a poem about the experience. News that these cultured men were living like “Sacs and Sioux” in the wilderness appeared in newspapers across the nation and helped fuel a widespread interest in exploring the Adirondacks.

In this book, James Schlett recounts the story of the Philosophers’ Camp, from the lives and careers of—and friendships and frictions among—the participants to the extensive preparations for the expedition and the several-day encampment to its lasting legacy. Schlett’s account is a sweeping tale that provides vistas of the dramatically changing landscapes of the United States in the second half of the nineteenth century. As he relates, the scholars later formed an Adirondack Club that set out to establish a permanent encampment at nearby Ampersand Pond. Their plans, however, were dashed amid the outbreak of the Civil War and the advancement of civilization into a wilderness that Stillman described as “a not too greatly changed Eden.” But the Adirondacks were indeed changing.

When Stillman returned to the site of the Philosophers’ Camp in 1884, he found the woods around Follensby had been disfigured by tourists. Development, industrialization, and commercialization had transformed the Adirondack wilderness as they would nearly every other aspect of the American landscape. Such devastation would later inspire conservationists to establish Adirondack Park in 1892. At the close of the book, Schlett looks at the preservation of Follensby Pond, now protected by the Nature Conservancy, and the camp site’s potential integration into the Adirondack Forest Preserve.