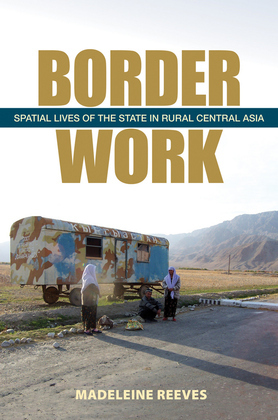 by Madeleine Reeves (Author)
Buy for $14.99 Excerpt
Nonfiction History History by country Asia Central Asia Social science Human geography Anthropology
warning_amber
One or more licenses for this book have been acquired by your organisation details

In Central Asia's Ferghana Valley, where Kyrgyzstan, Uzbekistan, and Tajikistan meet, state territoriality has taken on new significance in these states' second decade of independence, reshaping landscapes and transforming livelihoods in a densely populated, irrigation-dependent region. Through an innovative ethnography of social and spatial practice at the limits of the state, Border Work explores the contested work of producing and policing "territorial integrity" when significant stretches of new international borders remain to be conclusively demarcated or effectively policed.Drawing on extensive ethnographic fieldwork, Madeleine Reeves follows traders, farmers, water engineers, conflict analysts, and border guards as they negotiate the practical responsibilities and social consequences of producing, policing, and deriving a livelihood across new international borders that are often encountered locally as "chessboards" rather than lines. She shows how the negotiation of state spatiality is bound up with concerns about legitimate rule and legitimate movement, and explores how new attempts to secure the border, materially and militarily, serve to generate new sources of lived insecurity in a context of enduring social and economic inter-dependence. A significant contribution to Central Asian studies, border studies, and the contemporary anthropology of the state, Border Work moves beyond traditional ethnographies of the borderland community to foreground the effortful and intensely political work of producing state space.

Drawing on extensive and carefully designed ethnographic fieldwork in the Ferghana Valley region, where the state borders of Kyrgyzstan, Tajikizstan and Uzbekistan intersect, Madeleine Reeves develops new ways of conceiving the state as a complex of relationships, and of state borders as socially constructed and in a constant state of flux. She explores the processes and relationships through which state borders are made, remade, interpreted and contested by a range of actors including politicians, state officials, border guards, farmers and people whose lives involve the crossing of the borders. In territory where international borders are not always clearly demarcated or consistently enforced, Reeves traces the ways in which states' attempts to establish their rule create new sources of conflict or insecurity for people pursuing their livelihoods in the area on the basis of older and less formal understandings of norms of access. As a result the book makes a major new and original contribution to scholarly work on Central Asia and more generally on the anthropology of border regions and the state as a social process. Moreover, the work as a whole is presented in a lively and accessible style. The individual lives whose tribulations and small triumphs Reeves so vividly documents, and the relationships she establishes with her subjects, are as revealing as they are engaging. Border Work is a well-deserved winner of this year’s Alexander Nove Prize.