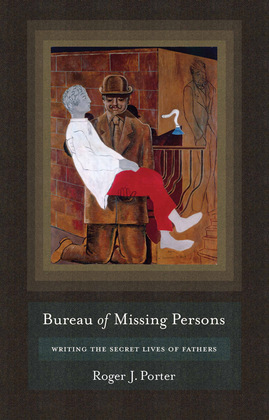 A devoted reader of autobiographies and memoirs, Roger J. Porter has observed in recent years a surprising number of memoirs by adult children whose fathers have led secret lives. Some of the fathers had second families; some had secret religious lives; others have been criminals, liars, or con men. Struck by the intensely human drama of secrecy and deception played out for all to see, Porter explores the phenomenon in great depth. In Bureau of Missing Persons he examines a large number of these works-eighteen in all-placing them in a wide literary and cultural context and considering the ethical quandaries writers face when they reveal secrets so long and closely held.

Among the books Porter treats are Paul Auster's The Invention of Solitude, Alison Bechdel's graphic memoir Fun Home, Essie Mae Washington-Williams's Dear Senator (on her father, Strom Thurmond), Bliss Broyard's One Drop, Mary Gordon's The Shadow Man, and Geoffrey Wolff's The Duke of Deception. He also discusses Nathaniel Kahn's documentary film, My Architect. These narratives inevitably look inward to the writer as well as outward to the parent. The autobiographical children are compelled, if not consumed, by a desire to know. They become detectives, piecing together clues to fill memory voids, assembling material and archival evidence, public and private documents, letters, photographs, and iconic physical objects to track down the parent.