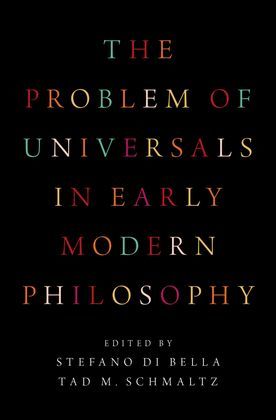 The Problem of Universals in Early Modern Philosophy

The ancient topic of universals was central to scholastic philosophy, which raised the question of whether universals exist as Platonic forms, as instantiated Aristotelian forms, as concepts abstracted from singular things, or as words that have universal signification. It might be thought that this question lost its importance after the decline of scholasticism in the modern period. However, the fourteen contributions contained in The Problem of Univerals in Early Modern Philosophy indicate that the issue of universals retained its vitality in modern philosophy. Modern philosophers in fact were interested in 3 sets of issues concerning universals: (i) issues concerning the ontological status of universals, (ii) issues concerning the psychology of the formation of universal concepts or terms, and (iii) issues concerning the value and use of universal concepts or terms in the acquisition of knowledge. Chapters in this volume consider the various forms of "Platonism," "conceptualism" and "nominalism" (and distinctive combinations thereof) that emerged from the consideration of such issues in the work of modern philosophers. Furthermore, this volume covers not only the canonical modern figures, namely, Descartes, Spinoza, Leibniz, Locke, Berkeley, Hume and Kant, but also more neglected figures such as Pierre Gassendi, Pierre-Sylvain Regis, Nicolas Malebranche, Henry More, Ralph Cudworth and John Norris.