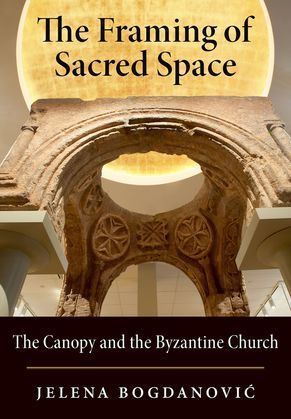 The Framing of Sacred Space

The Framing of Sacred Space offers the first topical study of canopies as essential spatial and symbolic units in Byzantine-rite churches. Centrally planned columnar structures--typically comprised of four columns and a roof--canopies had a critical role in the modular processes of church design, from actual church furnishings in the shape of a canopy to the church's structural core. As architectonic objects of basic structural and design integrity, canopies integrate an archetypical image of architecture and provide means for an innovative understanding of the materialization of the idea of the Byzantine church and its multi-focal spatial presence.

The Framing of Sacred Space considers both the material and conceptual framing of sacred space and explains how the canopy bridges the physical and transcendental realms. As a crucial element of church design in the Byzantine world, a world that gradually abandoned the basilica as a typical building of Roman imperial secular architecture, the canopy carried tectonic and theological meanings and, through vaulted, canopied bays and recognizable Byzantine domed churches, established organic architectural, symbolic, and sacred ties between the Old and New Covenants. In such an overarching context, the canopy becomes an architectural parti, a vital concept and dynamic design principle that carries the essence of the Byzantine church. The Framing of Sacred Space highlights significant factors in understanding canopies through specific architectural settings and the Byzantine concepts of space, thus also contributing to larger debates about the creation of sacred space and related architectural taxonomy.