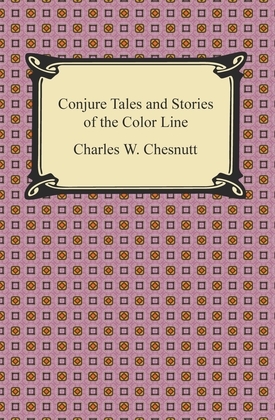 Conjure Tales and Stories of the Color Line

Charles W. Chesnutt (1858-1932) was an author, essayist and political activist whose works addressed the complex issues of racial and social identity at the turn of the century. Chesnutt's early works explored political issues somewhat indirectly, with the intention of changing the attitudes of Caucasians slowly and carefully. His characters deal with difficult issues of miscegenation, illegitimacy, racial identity and social place. They also expose the anguish of mix-race men and women and the consequences of racial hatred, mob violence, and moral compromise. "Conjure Tales and Stories of the Color Line" is a collection of eighteen short stories that have a deep moral purpose mixed with elements of magic and conjuring. Included in this collection is Chesnutt's first published short story, "The Goophered Grapevine". It is set in "Patesville" (Fayetteville), North Carolina and is a story within a story in which each story is told by a different narrator. Also in this collection among many others is "The Conjurer's Revenge" that depicts Uncle Julius duping John into buying an old, useless horse.