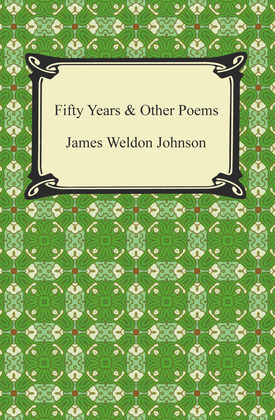 James Weldon Johnson (1871-1938) was an American author whose work extended into politics, poetry, journalism, teaching, music and civil rights activism. He is most famous for his book "The Autobiography of an Ex-Colored Man", which he published anonymously in 1912. Johnson's works deal with issues of race, particularly slavery, lynching, black rights and interracial relationships. His first collection of poetry, "Fifty Years and Other Poems", was published in 1913 to mark the fifty-year anniversary of the Emancipation Proclamation. The work was comprised of traditional and dialect poetry, and introduced arguments that would later be influential in the Civil Rights movement. The collection includes "Fifty Years," an homage to Abraham Lincoln, the protest poems "To America" and "Brothers," and a section entitled "Jingles and Croons" that touch on somewhat more temporal and humorous subjects, but continue to portray Johnson's serious, fervent beliefs.