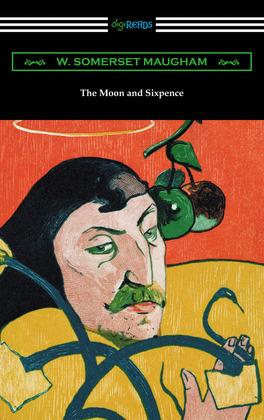 First published in 1919, W. Somerset Maugham’s “The Moon and Sixpence” is an episodic first person narrative based on the life of Paul Gaugin. At the center of the novel is the story of Charles Strickland, an English banker who walks away from a life of privilege, abruptly abandoning his wife and children, in order to pursue his passion to become an artist. Strickland leaves London for Paris and ultimately Tahiti, mirroring the life of Gaugin who would also split with his wife to pursue a life of painting eventually immigrating to Tahiti. The title of the novel, which is never clearly explained in the novel, comes from a review for Maugham’s previous work “Of Human Bondage” in which that novel’s protagonist, Philip Carey, is described as “so busy yearning for the moon that he never saw the sixpence at his feet.” The moon in this sense might be seen as the lofty ambition to pursue a life of artistic expression in contrast to the sixpence which represents the security of a middle-class life style with wife and children to which the protagonist abandons. “The Moon and Sixpence” is the story of the demands that can be placed on a tortured artistic soul and consequently the lives that it touches. This edition includes a biographical afterword.