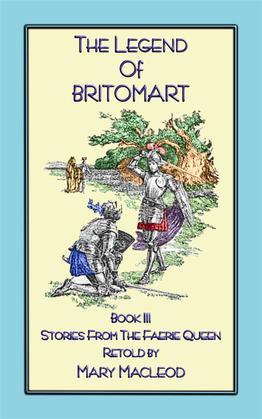 THE LEGEND OF BRITOMART - Stories from the Faerie Queen Book III

Britomart is a female knight, the embodiment and champion of Chastity. She is young and beautiful, and falls in love with Artegal upon first seeing his face in her father's magic mirror. Though there is no interaction with him, she falls in love with him, and travels, dressed as a knight and accompanied by her nurse, Glauce, in search of her beloved Artegal. She carries an enchanted spear that allows her to defeat every Knight she encounters.

After many adventures, it is only at the end of her quest Britomart is challenged by two knights who both seek to avenge their previous defeat at the hand of the unknown “Knight with the Ebony Spear”, who is in reality Britomart. Both challenge, but again are unseated by Britomart. In his defeat the beautiful face of Sir Artegal is revealed and her mind at once recalls the day she first saw his face in her father’s enchanted mirror. Only then does her courage began to falter, and her spirit grow tame, so that she softly withdraws her uplifted hand.

Sir Scudamore, who has been observing the joust is glad at heart and exclaims with jest, "Truly, Sir Artegal, I rejoice to see you bow so low, and that you have lived to become a lady's thrall!"

When Britomart hears the name of Artegal, her heart leaps and trembles with joy. She flushes deeply, and tries to hide her agitation by feigning anger. But all is put right and Britomart and Artegal fall deeply in love and can’t bear to be parted.

But a happy ending is not yet in sight as Sir Artegal is on a quest and takes his leave. Britomart is upset and can hardly bear to be parted. Britomart then joins Sir Scudamour on his quest to find his Lady Amoret and they return to where Britomart had last seen her.