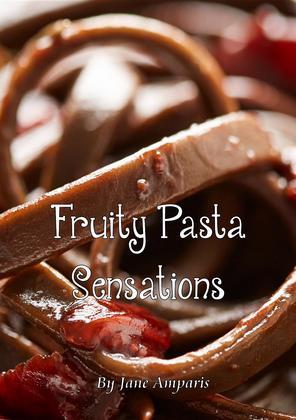 Around the world, various fruits feature as staples in our diets. There are a vast range of different fruits to select from. There are of course sweet fruits such as berries, sour fruit such as lemons, and savoury fruit such as pumpkin. Any fleshy part of a plant that is edible and supports seeds is considered to be fruit. With such a broad definition for what is considered fruit one can reflect on the huge variation of flavours that are available.

For most of us, the humble pasta is used as a staple in our diets. Its versatility opens up a world of gastronomic possibilities. Most of us would not consider mixing the two food groups however the concept of fruit pasta has been dabbled with for many years. Recipes such as ‘avocado chicken’ and ‘mango chicken’ have previously been explored and are sometimes available on menus at various eateries.

This book not only features some tasty pre-existing recipes, but also explores new scrumptious fruit pasta options. Many of the recipes featured in this book were devised in my very own kitchen. I had fun theorising and trialling each of my creations to get it just right. Firstly, I invite you to trial my fruit pasta creations along with some other traditional fruit pasta combinations. Each meal is a tasty delight just waiting for a curious palate.

Secondly, I encourage you to try out your own cooking creations. I believe that cooking doesn’t need to be a chore. It can be a means of expressing yourself and your creativity! Honestly, not every meal had worked out the first time. Some just needed to be tweaked, whilst some nights the only family members eating pasta were the dogs! The fun is in trying something new and potentially unearthing a true culinary delight!