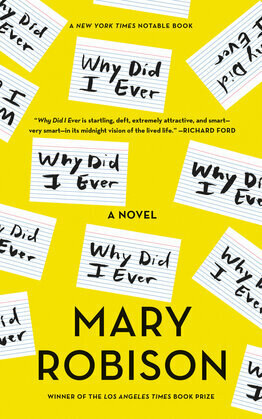 Why Did I Ever

"An epic portrayed in miniature, a cry of cosmic pain in a voice of absurdist humor, an earnest insistence on maternal love in the language of skepticism…. [A]ll of Robison's minimalist genius is at work here." —Cathleen Schine, New York Times Book Review

Three husbands have left her. I.R.S. agents are whamming on her door. And her beloved cat has gone missing. She's back and forth between Melanie, her secluded Southern town, and L.A., where she has a weakening grasp on her job as a script doctor. Having been sacked by most of the studios and convinced that her dealings with Hollywood have fractured her personality, Money Breton talks to herself nonstop. She glues and hammers and paints every item in her place. She forges loving inscriptions in all her books. Through it all, there is her darling puzzling daughter who lives close by but seems ever beyond reach, and her son, the damaged victim of a violent crime under police protection in New York. While both her children seem to be losing all their battles, Money tries for ways and reasons to keep battling.

The story is told like a furious and persuasive diary—a tale as fierce and taut as Money herself. Why Did I Ever is a book of piercing intellect and belligerent humor. Since its first publication in 2002, it has had a profound impact, not only on Robison's devoted following but on the shape of the contemporary novel itself.